Who is the Tollund man? 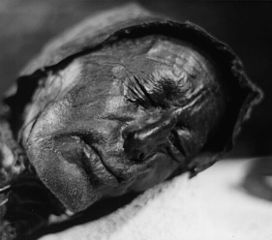 The Tollund man is one of the best preserved pre-historic human beings in the world today. He was preserved in a peat bog for over 2000 years and is now a window into the past of human life.

When, how and where was he found?

The body was found by Viggo and Emil Hojgærd while they were cutting peat. The body came from somewhere close to Bjældskovdal in Sweden on the 6th May 1950.

Why and How did he die?

He was found with a rope around his neck, suggesting that he was hanged or strangled, but nobody knows which. Recently it was discovered that he was hanged, but their is still some doubt, as were the knot for the noose was their was no mark on his neack.

Why is the Tollund man so intresting?

He is a very rare example of death by hanging and being so well preserved means that we can study the ancient punishment in more detail.

It is believed that he was alive somewhere between 300-400 BC, meaning life would have been mostly farming to stay alive. However, his last meal was a soup, made of fairly unusual herbs meaning he was either a sacrerfice or a very important person.

How did the body stay so preserved?

The body is so impresively well preserved due to the acidity of the peat bog. So well, that when he was found, his body was mistaken for a recent murder at first.

How is the body preserved now?

The head is now preserved by having bees wax inside. The body is a fake, as it was not preserved by the people doing the work, as the technology to do so was not available at the time.

Where is the body now?

The body is now displayed at the Silkeborg Museum in Sweden.

Are there other examples of preserved human beings?

The body, Elling Woman had been discovered in the same bog and others have been found all over the world. Infact almoust every contry has discoverd atleast one if not more, body's in one of there bogs.